Here is the 5% Cash Back Rotating Categories for the Chase Freedom. I actually got this because I am a member and I got an email asking me to sign up for the first quarter. Here is the list.

Here are a couple of initial observations I have made. Firstly, there are two quarters where the “gas” category appears. This is actually good news because for six months, cardholders can get 5% rebates from gas stations. Secondly, I was surprised to see the addition of Amazon.com during the first quarter. I was also surprised and happy to see Kohl’s and Best Buy in the category for the 4th quarter, but as we will find out soon, it comes at the expense of the “department store category”.

In 2011 and 2010, grocery and drugstores, dining, utilities and child care were in the 1st quarter. This year, none of these categories appear in the first quarter and instead, it has been replaced by gas and purchases at amazon.com. In 2011, the second quarter category was main home furnishings and home improvements. For 2012, Chase has not even included this category at all. Instead, it has been replaced by grocery stores and movie theaters (great for folks who watch the latest summer releases). In the third quarter of 2011 and 2010, Chase had airlines, hotels and gas in the category. For 2012, it’s just gas and restaurants. Instead, they have shifted the hotels and airlines to the fourth quarter and added Kohl’s and Best Buy (which I think makes lots of sense). However, in 2010 and 2011, they did have the “department store” category in the 4th quarter and I’m sure that has helped many folks save lots of money. However, by including only Kohl’s and Best Buy, they have narrowed by the field and this is probably not such a great thing for cardholders the next holiday season.

To sum up, I think that having two quarters where you can earn 5% on gas is a great thing. Folks use the card for home improvement purchases in spring will not be too happy. It is also a shame that they took away the “department store” category in the fourth quarter of 2012 and instead replaced it with Kohl’s and Best Buy only.

Below is a screenshot of the email that I got. 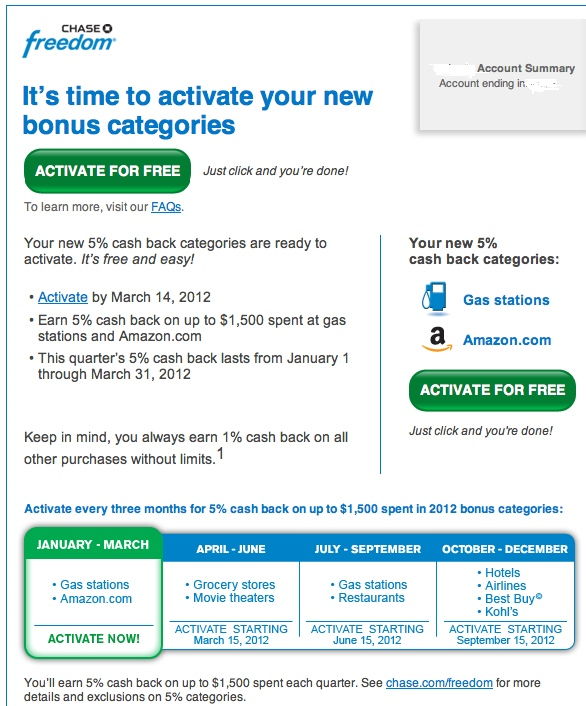