Why Paying Gas With Credit Card Is Better Than Cash

Yesterday, I did our annual ritual and drove about an hour to see our CPA. I noticed the gas tank was about one eighth full when we started driving. So I reminded myself to fill up the gas tank on the way back. I kept my eyes open for gas stations along the way after we got off the highway. The gas prices definitely were cheaper than they were back where I lived. I made a mental note of the prices and noted one station that appeared to have the lowest price and I told myself that I will use this particular station on the way back.

On the way back after lunch, I remembered the gas station and stopped to fill up my car. The gas station was “US Gas”, definitely not one of the “big boys”. It definitely had the lowest price (or so I thought). The sign said that it was $3.49 per gallon for regular (the lowest grade). I recall that the next cheapest price was about $3.53 per gallon.

It was only after I stopped my car that I realized that this was one of those stations that gave you the lowest price only if you paid cash. If you used your credit card, you will have to pay a higher per gallon gas price. To be honest with you, this was the first time I came across a station like that because there aren’t too many like that where I live. I decided to pay cash since I had cash in my wallet (which was very rare). The instructions at the pump says I had to “prepay”. 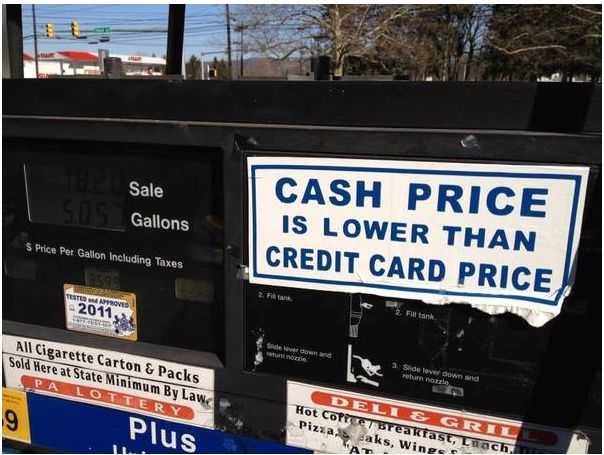 So I went inside the store and the guy behind the counter said I had to pay him what I thought the amount would be and he would give me the change if there was extra. I gave him a $50 and proceeded to fill up my car. True enough, the attendant set the maximum charge to $50. Once I hit $50, the pumped stopped. I knew my tank was not full, so I went back to the attendent and gave him another $10. I managed to fill up my car but it cost only about $8 more. So I went back inside again and got my $2 change.

So initially, I was rather happy. It appears that I have saved a few bucks. It was a little inconvenient as I had to carry cash and pay a couple of times because I underestimated how much it would cost to fill the gas tank.

As I was driving, I made it a point to compare other gas prices as well. I passed a Hess station and the price for regular gas was $3.53 and so were many other stations. And these other stations appear to charge the same price regardless of how you pay. Then my mind started doing some calculations and I realized that perhaps I could have actually been “saving more” money using a credit card! How could that be? Here’s how I look at it.

I have the Chase Freedom Card and the Amex Blue Cash (the grandfathered one). Right now for the 1st quarter, the Chase Freedom is paying 5% cash back for gasoline spending. So I made a mental calculation of what was 5% of $3.53. It turned out to be about 17 cents since ten percent of $3.53 was about 35 cents. So five percent was about 17 cents. But the price per gallon I paid at the station I went (which I paid for cash) was $3.49 per gallon. This was way less than 5% of the price at other stations. It fact, I only saved about slightly more than 1% by using the station I did and paying by cash. I could have gone to HESS, paid with my credit card and get 5% cash back, which was about 17 cents per gallon. Instead I only saved about 4 cents a gallon!

In fact, even if you used a cash back card that only paid 2% cash back on gas spending (like the Discover Open Road Card and the new Blue Cash Everyday), you are still better off paying the slightly higher price but with your credit card because the cash rebate will more than offset the higher price.

But with a 5% card like Chase Freedom or Discover More (more 1st and 3rd quarter this year), I could save much more. In fact, if you have the PenFed Cash Back card (which pays 5% rebates for gas the whole year round), you would save even more!

There have been lots of unhappiness with Visa and MasterCard because of interchange fees. There has been lots of rants about not using credit cards and using cash instead. Many site gas stations as a perfect example of how this should work. But when I did the math, it appears that as long as you are using a cash back card or a good gasoline cash back card, you are better off paying with a credit card because of the rebates you can earn.

But to be totally safe, make sure you do some price comparisons (especially if the gas stations are close by) and make a mental calculation if the lower prices (if you pay by cash) is more in percentage terms than the cash rebate you will get from your credit card. That would be the smart way to go about this whole business. But I bet you would find that in most cases, the rebates you get from your credit card for paying for gas will be more than the price reduction from the gas station if you pay by cash.