The ABC’s of Getting Out of Debt 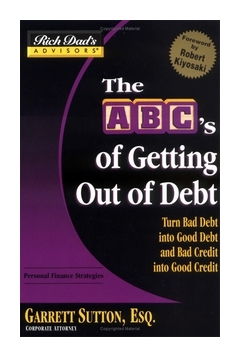 Okay, so this is another Kiyosaki book. (Of Rich Dad Poor Dad fame). Actually, it’s a “Friends of Kiyosaki” book, run under the heading “Rich Dad’s Advisors”.

Let me give you the intro by Kiyosaki here:

Rich dad explained further saying, “Business and investing are team sports.” The average investor or small business person loses financially because they do not have a team. Instead of a team they act as individuals who are trampled by very smart teams.

That is why the Rich Dad’s Advisors will offer guidance to help you know who to look for and what kinds of questions to ask so you can gather your own great team of advisors.

That’s it. The rest of the book is not by Kiyosaki, but by an author named Garret Sutton, Esq. I did think this was an elegant way of introducing a new team of writers under Kiyosaki’s valuable marketing name. Frankly I don’t think Kiyosaki allowed the publishing company to use his name because it’s better to work as a team, I think it was a smart way to jump on the Kiyosaki bandwagon and sell some copies.

However, that’s just my observation. Whether the book is written by Kiyosaki or not, really has no bearing on whether it’s a good book or not. So, let’s take a look at some of the details!

Chapter One: Credit and Debt

I was very surprised to see that the first chapter contained only two (most likely fictional) examples of the evils of credit card debt.

I certainly agree that credit card debt can be evil. Credit is a wonderful tool when you manage it correctly, and a terrible, terrible thing if you do not. That’s pretty much a fact – at least in my experience. What surprised me about the book though, is that it offered no solutions. There were no strategies for getting out of debt, or paying off your credit cards. Just two, overblown worst case scenarios apparently meant as a warning.

Chapter Two: The Psychology of Debt

According to the book there are four classes of financial personalities. Wishers, Wasters, Wanters and Winners.

Wishers use their credit thoughtlessly. They now, pay later constantly, and they give little thought to whether or not they actually can afford to pay the bill later.

Wishers lose out because they only see the minimum payment, rather than the total of their debt.

Wasters spend money as a means of psychological escape. They on credit so that they can experience instant gratification, and they never give any thought to their long term goals. They continue spending on credit far past the point where they should stop.

Wanters “want” absolutely everything, and they want it now. They have the worst problem with instant gratification, and they can’t bring themselves to put anything off so that their future might be better.

Winners, apparently, borrow money to make themselves rich. They finance land rather than sweaters, and they find a way to hand someone else the tab. Yup. that’s the explanation!

Good debt involves someone else paying off the debt for you. An excellent example of a good debt is a real estate investment loan in which a tenant pays rental income in excess of the mortgage and related expenses. An SBA (Small Business Administration) loan that allows your business to grow is another example of good debt (so long as your business can pay it off). The best loans are nonrecourse loans which require no personal guarantees. Good debt leads to wealth.

Bad debt is something you pay off yourself. Credit cards, car loans, consumer loans, and home mortgages are examples of bad debt. Some bad debt is better than other bad debt. For example, ing a personal residence is in most cases better than ing a car on credit. And while we’re not saying that you shouldn’t a personal residence on credit, you must remember that a home mortgage is a bad debt because you yourself must pay it off. Bad debt takes money from your pocket, making you poorer and poorer.

This is really a classic example of Kiyosaki’s thinking. He says frequently throughout Rich Dad, Poor Dad that a mortgage is a bad idea. While I can’t say that I really disagree with these principles, I do find them a little off the wall.

I do actually like that this book takes a bit of an unusual stand: Debt is not bad if it makes you richer. Otherwise, avoid it. I do have to admit that way of thinking makes a lot of sense to me. As an individual though, I prefer to have no debt whenever possible. I think it would be very easy to talk yourself into a “good debt” like rental property, and still come out on the losing end.

In my opinion this book fails to present any system of checks and bounds. It’s a reiteration of the same basic philosophies in Rich Dad Poor Dad, without any workable plans. There is no recommended plan to follow, no road map. Just a lot of theory.

Kiyosaki’s investing book was the same way. It’s like handing someone a map of the United States, and pinpointing New York, and saying..”This is where you need to be! Now Ready…Set…Go! Oh, but you have to figure out the map yourself! Or I guess you could by a $500 GPS. But I’m not going to help you, even though I made the same trip! I will make you feel good about it though!”

It’s all well and good to tell people where they should be, but for goodness sake, give some sort of instruction, not just theory. I am sorely disappointed in this book.

At best, it is a rehashing of previously covered concepts. At worst, it is filled with platitudes, and overblown examples that have very little value. It is entertaining, I’ll give it that. The writer did a great job of making it quick and easy to read, but there is very little instructional value.

Final verdict? I want the $10 I spent on the book back, as well as the four hours of my life it took to read it. Skip this one guys. Especially if you’ve ever read any other book by Kiyosaki. You’ve already seen the material.