Credit After Bankruptcy: A Book Review 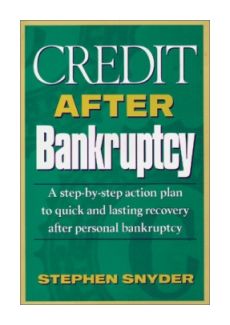 This is a book that I have really been looking forward to reviewing. I am very glad that I finally got the chance.

Just after I declared bankruptcy, I was researching ways to repair my own credit, and I ran across Stephen Snyder’s website. He is the author of this book, “Credit After Bankruptcy” and he has an excellent series of free newsletters that I made good use of when I began my own journey of recovery.

At that time I didn’t consider ing and reading the book that went along with the emails though. So, I was very happy to find it on the list of used books available on Amazon.com. Although the book does contain some of the same information mentioned in his emails, there was quite a bit of entirely new information too. Here are a few of the highlights:

Snyder Begins the book with a laundry list of some historical, and very famous people who have all declared bankruptcy.

Well, I was a bit encouraged by the list…after all it seems past bankruptcies do not always prevent future success..at least, if the names on that list are any indication. I know that I very much want to be successful. I don’t want to live my life they way I did before my bankruptcy. So any bit of knowledge that I can understand, and put into practice, is very valuable to me.

Happily, this book was full of knowledge. Better yet, it was easy to read, and I am betting that it will be easy enough to actually use the information that it gives.

Chapter 1: The story of Stephen and Michele.

Their bankruptcy was caused by living beyond their means. Stephen changed jobs, which reduced their income, but they kept right on living they way that they had always lived. Even though they no longer had the income to support their lifestyle.

They did not file their bankruptcy jointly, as my husband and I did. Instead Stephen’s wife Michele filed first, using a lawyer, and Stephen filed shortly afterwards on his own, with no legal representation. They quickly made, and quickly broke the resolution to never use credit again. They made several other resolutions though, and they did manage to keep those. Some of the foremost resolutions included:

They did make good on their other resolutions, and this book is the story of how they did it. It did turn out to be a good thing for them that they returned to using credit as quickly as possible. The Snyder’s were able to have a much better quality of life faster than if they had returned to cash only. This is 100% because they managed their credit correctly though.

I do not believe that it is advisable for everyone who is fresh out of a bankruptcy to begin using credit immediately. Especially if credit cards are what led you to bankruptcy in the first place. From my own experience, I think that a return to using credit should only happen when you reach the level that Stephen and Michele did – when you understand completely how it works, and how to help yourself (instead of hurt yourself) by using it.

Chapter 4: Why Re-establishing Credit is Important

I skipped chapters two and three here because they dealt with the Snyder’s qualifications to teach about bankruptcy recovery, and a definition of what bankruptcy is. Chapter 4 went into a lot more detail about why you should work hard to raise your credit scores again once your bankruptcy has been discharged. Stephen presents a six step strategy for bankruptcy recovery. These are good sounds steps, and they would probably benefit a lot of people who have not yet declared bankruptcy, or are in dire financial straits.

While these are the basic steps for success (and they are repeated throughout the book) I found a literal ton of examples, and advice that I believe will help me in the future.

Besides bankruptcy recovery tips, Snyder included specific questions to ask your future lenders, the best way to finance a house and a car after bankruptcy, and a specific formula that lenders use when deciding whether or not to give you a loan. All of which was invaluable. But the real surprise, and the thing that I liked most about this book was that there are several large sections on personal development.

I think that when you have a mistake as large and looming as bankruptcy, it’s probably wise to spend some time on personal development. At least, I have found that to be true in my own life. The more I read, and the more I expose myself to the knowledge of those who have walked the same path, the easier it is for me to change my own bad habits.

I do place one caveat on this book: It is the personal story of Stephen and Michele Snyder. To some degree, what worked for them can work for me or you. However, it is just one story. It is not a far-reaching, all-encompassing story, it is their story. So please, take the advice given with that grain of salt. They understand the situation far better than someone who has not been through bankruptcy, but their words are definitely colored by their own experiences.

I would definitely recommend this book to anyone who has declared bankruptcy. If for no other reason than after you read it, you will have a little more hope than you did before. You are not alone. I am out here, recovering, and they Snyders, they have recovered too. It’s never an easy thing, but it can be done. And Stephen has given us a clear road map with markers that show us the fastest, and easiest methods of recovering from a bankruptcy.

If you are going to this book, or check it out from the library, I recommend checking it out along with The Complete Guide To Credit Repair.

This is because the Snyders recommend using a company to help clean up your credit report (which is expensive!) and the Complete Guide to Credit Repair shows you how to do it on your own. I think right now you can get them both used, on Amazon for under $10. Or better yet, for free from the library!

Have a question for us? Leave a comment below!