While there are lots of personal finance bloggers who have successfully got out of debt, preach frugality, talk about how to make more money, the federal government has been pissing away our tax dollars and racking up huge debt that our future generations will have to bear in the form of massively higher taxes. They are robbing the future generation to pay the present generations massive entitlement program (which mostly started from legislation in the 1930s – and yet we talk so much about how great Hoover was!). It is kind off likely identity theft where your ID is used to open multiple credit cards and before you know it, you have incurred debt because of ID theft! But unlike where it can be reported, you can’t really report this to any authority.

This carnival is dedicated to all personal finance bloggers out there for preaching sound money principals – chiefly to spend less than we earn. This, the federal government has failed to do for years. I do not care if you are a republican or democrat, the truth is that the US is headed for a massive meltdown if we cannot face our debt problems. For those who have, you know that sacrifice is important. But it looks like we do not have will to face our problems. No politician can ever be elected if he says we’ll cut medicare or social security. Changes will be forced upon us only when “the shitteth hath hitteth the fan”.

So here is a Q&A about our financially incompetent government.

When was the last time the United States had no debt?

Answer – Back in 1836. Between 1792 to 1834, the United States was slowly able to reduce the size of their debt relative to GDP from 35% to 0% in 1836. At that time Andrew Jackson was the president of the United States. Since then until today, we have racked up close to 12 trillion. Will we ever be debt free again?

I don’t know the question to that one, but a couple of folks here have just become debt free and had their Credit Card is paid off. Here is another get out of debt story.

When did the US federal deficit and spending really got out of control?

Answer – Can’t pinpoint an exact year. But since the early 70s, we as a nation have been spending like there is no tomorrow! Take a look at the chart below (yes, the data is from 1792). It is in billions! Our fore fathers must be tossing and turning in their graves. Perhaps the federal government (executive branch and congress) needs some tools. I’m not too sure if YNAB – You Need A Budget is of any help to the federal government! Maybe America just ain’t good with budgeting. Heck, even Microsoft Money decided to pull out of the market though there are many budgeting tools and software still available.

Why doesn’t the United States run a budget surplus and save, like every personal finance guru advocate?

The reason is that we are able to get away with it. How? Since we were the victors of World War 2, as part of the Brenton Woods agreement (aside from the gold standard), all international trade was to be denominated in US Dollars. Ever wondered why oil, gold, corn, orange juice or any commodity for that matter is traded in US Dollars? Look at it this way, when someone from say Italy wants to something in dollars, he or she has to have earned enough Lira (or Euros today) to convert them to US Dollars. Then he could them. But for us, we our currency. We do not have to convert them to anything. The folks who save (or rather have trade surplus – export more than import), have their savings in dollars because everyone trades in dollars. The only viable place to invest in US Government debt. Hence, that is the reason we are able to run persistent deficits (violating all personal finance rule #1 – spend less than you earn). If our currency is not the global currency, we would not have been able to get away with this. Perhaps this is the winners curse?

Can’t the Federal Government cut spending, we pf bloggers have lots of ideas for them!

Yeah, I know everyone has some ideas to cut spending. Maybe we should get officials to read the festival of frugality every week! But looks here, curbing your summer spending by 56%, going to college with less, go DIY and save money, cutting your TV bills, saving money on bank fees and other money saving tips ain’t going to put a dent in the federal deficit.

To do that, we probably need to do drastic things like make social security not pay as you go. And drastically cut back on medicare spending and entitlement. So in fact, if you are voting on drastically reducing the federal deficits, you are talking about massive entitlement reform (and potentially screwing your parents!). Politicians cannot get elected because older folks vote in greater numbers because they have more at stake.

Here is a pie chart for the Federal Budget for 2009 (courtesy of wikipedia) – Medicare, Social Security and Defence forms the largest components. Medicare expense is projected to grow the fastest! 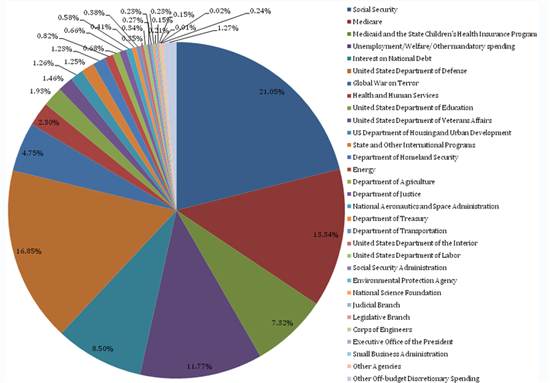 Maybe Drastic Cuts in Spending are not the way, maybe we need a plan for debt reduction over the long haul?

With 12 trillion in debt, how long does it take? Not too sure if a bankrate calculator can help on this. Dave Ramsey’s has his baby step method, you know, the tortoise and the hare method. But to be honest, I’m not sure we we will ever be getting out of debt at that rate! In the government bond market, snow flaking simply does not work. You have to redeem debt with the nearest maturities and they are the ones with the lowest interest rates, and with the most issuance. So whatever snowball or snowflake methods can be thrown out of the window!

Why do other countries have sovereign wealth funds and we do not?

Because we do not save, that’s why. How can we save if we have been constantly running a budget deficit? China exports more than it imports. The middle east have surplus revenues from oil. All Asian countries who went through the Asian crisis have saved and have huge foreign reserves. We have nothing! Nada! Zip! but just future social security and medicare obligations! In the personal finance world, there is always a debate about how much of our savings should be used for debt reduction versus emergency fund savings. The federal government does not save and hence this is an irrelevant question. The United States has no savings – check out the list of largest sovereign funds according to pioinline.com 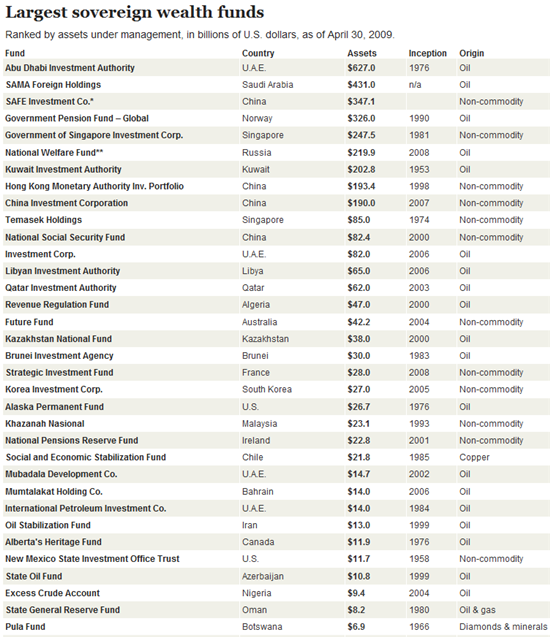 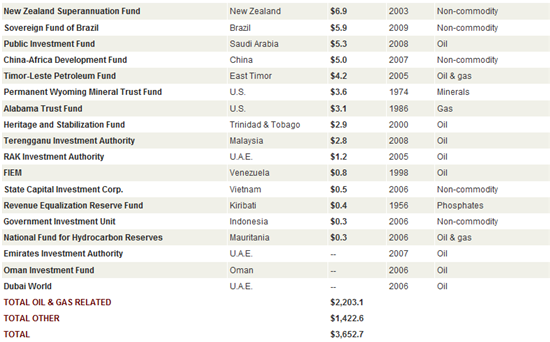 Why do we have to borrow from countries like China?

Because just as our federal government does not save, we as the voter, people, consumers do not save enough as well. Japan has an even large debt problem than us (ie debt to GDP). The reason the never had a problem funding their national debt is because the are a nation of savers. The government can borrow from their own people. We can’t even borrow from ourselves first because we as a people do not save enough! Federal borrowing exceeds personal savings. There is only so much treasuries a PIMCO total return fund can !

Why are we still able to borrow money relatively cheaply?

Reason is probably because our federal debt is rated triple A by Moodys and S&P and Fitch (although they did rate a lot of sub prime mortgage CDOs triple A at one stage too). The US government is perceived to the the safe investment in the world with the least risk of default. An emerging country may have its debt rated triple B and it will command a risk premium over US treasuries. In the 1800s when the US was an emerging economy, there were periods when our debt was trading at 6% (low yield for an emerging economy) but was 3% higher than the then “safer British debt”. Hence, a triple A rating from the rating agencies plus a perceived “safest asset” perception ensures we can borrow at low rates (just like how your fico score can also impact your borrowing cost). On a personal level, your credit score can also affect your career.

How if countries lose confidence in the US ability to run a sustainable budget, all bets are off. Countries that saw a massive devaluation in their currencies saw domestic interest rates rise to as high as 20% can you imagine what that sort of mortgage rate will do to your home value?

Is there a chance of the US government ever defaulting on its debt?

There is always a chance. But like consumers and individuals, sovereign nation states have other options. They can print money and devalue their currency (perhaps that’s the route that we are headed for – FDIC insurance will mean nothing if your currency can’t anything!). Typically, sovereign states can negotiate with their creditors (without having to go to a chapter 13 hearing!) to take a hair cut and exchange their debt for new terms.

What if the world decides not to use the US dollar as the international currency?

The world already does not want to use the US dollar but it has no choice because there is no other real viable alternatives. It’s been close to 40 years since we left the gold standard that no modern central banker knows how to operate one even if we went to sound money rather than fiat money. But the fact that China has made arrangements with Brazil to trade in their own currencies are already debt warning signs that this might happen in the long haul. If the world were to suddenly not trade in US dollars, then there would be a flood of US dollars on the market because nobody wants them and nobody needs them if you have to goods in other currencies. Because of the massive supply, we will face massive inflation (in dollar terms) and also devaluation as there is no reason to hold a non-international currency. Interest rates will rise massively because bondholders will demand a risk premium, mortgage rates will go up, housing prices reprice again and banks have to mark down more assets again. You might want to consider having some inflation protected investments for yourself.

Can’t politicians come up with a plan to reduce our debt once and for all?

We certainly need them to be talking about it. Just as it would be nice to clear your personal debt and have a calm life, it would be great if we were a creditor nation again. Imagine that you pay off your mortgage, how can you do with that extra money in hand. But just imagine if you had just taken on a mortgage, the thought of having to pay someone for another 30 years is just too much for me. Imagine if you had to pay less taxes!

With the federal debt situation, it’s more like your grandchildren may have to pay for their mortgage too. Having said that, I hold up little hope for now. Our constitution is designed to be a gridlock system. Unless there is a crisis, like the US dollar losing its international currency status, little will change. We will probably pass a health care bill even if we cannot afford it! Yes, the system is broken and needs repair. But hey, when you are broke, you drive your 15 year car unless it reaches 250,000 miles or it dies on you. The federal government just doesn’t take advice like how to survive a recession. Their answer is to keep printing money and spend. And also borrow!

Many of us seem to be able to stop using credit cards irresponsibly, but not the federal government. The sad thing is that debt and credit are so much part of our lives today